2018 has been a really tough year for me. Things seemed to calm down in the beginning of november and I got back in music creation.
I just upgraded to Komplete 12 ultimate collectors edition and bought Arturia V-Collection 6. I was messing around with the new sounds trying to create a Hip-hop like track.

A day later, I received the news that Lucia was born and everything was perfectly fine with both of them.
Lucia is the 3th child of a friends daughter. Nothing special so far you think.
She has a 4 year old cute little boy and last year she was pregnant with her 2nd child. They knew it was a girl, but sadly enough, the baby was born dead. Loosing an significant other is hard to deal with, but loosing a child during birth is terrifying. I can’t even imagine how it felt. No-one deserves such an awful life experience.
I admire the parents to retry and make their 2nd child wish come true.
How many people do you know, who will do this? Knowing the same may occur again? There was a real chance the doctors told them.

Getting the exciting news of Lucia’s birth, I decided to write a song for the little one. Other people are giving toys, money, clothes….
Having an song written for her as a gift is more unique and timeless.
I’ve tried to capture the stress, relieve and happiness the family has been through the last year.
The song had to be something catchy, light footed and easy listening. It is also my first EDM style production.

Originally I had no intention to release this as a single, but my friends encouraged me to publish.
One of my friends pushed me even further: publish and donate this month income of the track to a non profit organization which supports parents who has lost a child. Even Lucia’s family granted this idea. They came up with a photo of Lucia, which I used as album art.
A child born as Lucia is often called a rainbow child, so this explains why they have chosen this particular image.

During december we have “Music for life” better known as “De warmste week”. This charity event is organized by one of our national radio stations. The goal is to collect funding for registered projects or non profit organizations to support their working. In this case I have chosen to donate this month’s income of the single to an organiszation called href=”https://www.bovendewolken.be/nl/home/&#8221; rel=”noopener” target=”_blank”>vzw: “Boven de wolken”.
They help parents who are suffering of child loss. It is also a great opportunity to contribute to our society and end this year with something positive.

The singel is available on your favorite musicplatform.

Thanks for your support, may the song makes you smile. 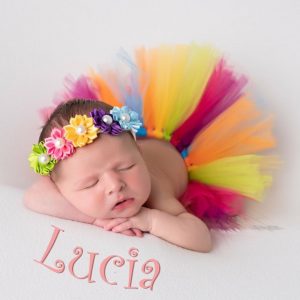